Shepherded for centuries and protected by a national seashore, this historic saltwater plantation enjoys one-of-a-kind status as America’s oldest hunting club. For the next owner of Cabin Bluff, the $64,000 question will be whether to continue its matchless legacy or…

Cabin Bluff’s historic timber-framed dock and pavilion can easily accommodate up to eight powerboats. Vessels up to 120 feet long can moor to the main dock.

For the next owner of Cabin Bluff, the $64,000 question will be whether to continue its matchless legacy or harness its resources on an even greater scale.

For Sidney Hawkes, an executive with Mead Corporation until his retirement in 1996, the perfect way to end the day at Cabin Bluff Sporting Plantation was on the long wooden dock that pokes out into the Intracoastal Waterway. Looking out on tranquil waters that lap ashore on Cumberland Island, he’d gingerly cast a line. Rod in hand and weary from the day’s hunts, Hawkes would revel in the sunset vista. Decades later, it remains etched in his mind’s eye.

“After dinner, I would be ready to go to bed. But I had to go out on the dock first,” Hawkes says. “There were sea trout you could catch and leave in the box, and when you came into the dining room in the morning, they’d be cleaned and cooked for you for breakfast.”

That’s how they do it at Cabin Bluff. 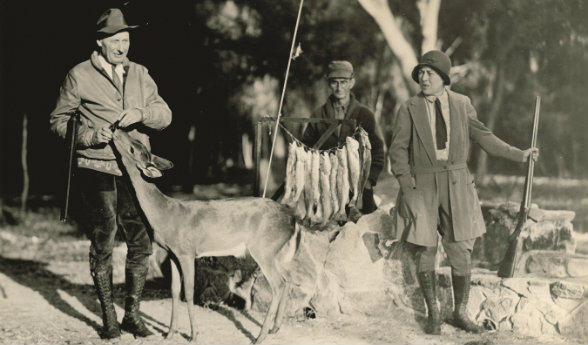 Who knows what type of call this guest’s guide used to lure this white-tailed deer back to camp.

A typical day at the saltwater plantation starts before sunrise with a soft knock on your door. It’s time for a light breakfast, one that gets you out into the field. Not an hour passes before you’re listening to your guide call in some hungry gobblers. Then you down a hot breakfast back at the lodge. In no time, you grab your gun and get ready to spend the rest of the morning quail hunting. If you time your seasons right, the afternoon has been booked stalking deer or wild boar. By the time you finish cleaning up, cocktails are being served. And if Sidney Hawkes is your host, the sumptuous dinner you are about to enjoy will be followed by a trip to the dock and a little night fishing. By the time you make it back to your cabin, more than likely, you’ll fall asleep before your head hits the pillow.

Cabin Bluff juts out into the Intracoastal Waterway just north of the Georgia—Florida line from Jacksonville and offers anglers in-shore (left) and off-shore fishing (right).

“It’s a sportsman’s paradise,” says LandVest Executive Vice President Joseph Taggart, who has the $55 million listing on the historic retreat which dates back to 1827. Originally known as the Camden Hunt Club, the property belonged to the Floyd family– a prominent clan with extensive financial and political ties. The Floyds built the first structures at Cabin Bluff and brought a sense of plantation prosperity to a region that was once the homeland and hunting grounds of the Timucuan Indians. Invitational hunts and boat races were staged at the Camden Hunt Club. One notable competition boasted a purse of $10,000, an enormous sum at that time.

Two-thirds of Cabin Bluff’s 10,300 acres are composed of oak hammocks and pine plantation. The remainder consists of tidal marsh and freshwater lowlands.

With the threat of civil war looming, many Camden Hunt Club members feared the loss of a way of life they cherished. The daytime conversations and evening toasts often echoed these concerns. At one such gathering in 1838, the hunt club president raised a glass to the State Rights Party of the South, declaring:

They will draw the sword and deluge the country with blood before they will yield a particle of their ‘Reserved Rights.’

Those fears materialized following the fall of the South. The ensuing economic hardships took a toll on the Floyd family, and the Camden Hunt Club eventually became a casualty of the conflict. Soon, the lush tapestry of mature pine and oak hammocks reverted to a tangled thicket.

A favorite game of Native Americans, the eastern wild turkey (left) thrives in Georgia and has long been a fixture at Cabin Bluff (right).

More than half a century passed before Howard Coffin, one of the founders of the Hudson Motor Car Company, acquired the acreage and re-established Cabin Bluff as a world-class hunting and fishing plantation. A well-connected automotive pioneer, Coffin invited other industrialists, celebrities, and politicians to his sporting plantation. One of his most celebrated guests was the country’s First Fisherman, John Calvin Coolidge Jr., and the First Lady, Grace Coolidge.

A lifelong angler, the 30th President was introduced to fly-fishing by the head of the White House Secret Service detail, Edmund Starling. In addition to overseeing the security detail of five presidents, Starling was a devout fly fisherman. The two became quite the pair, scheduling many a presidential vacation in close proximity to the country’s best waters. Not surprisingly, when Howard and Matilda Coffin invited the Coolidges to South Georgia over the Christmas holidays in 1928, the overture was warmly welcomed. The images of the native Vermonter at Cabin Bluff show a true outdoorsman in his element. 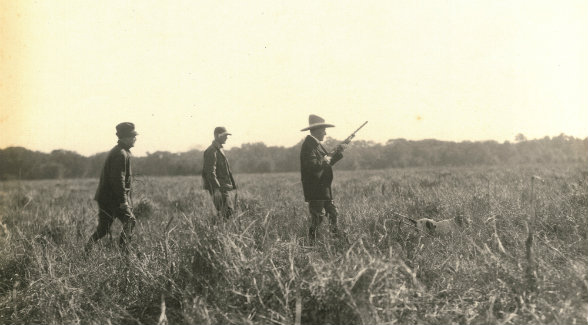 No matter if he were hunting or fishing, our 30th President stood out at Cabin Bluff, thanks to his distinctive wide-brimmed Stetson and lightning-quick reflexes.

The naming of the Coolidge Tavern honors that memorable visit. It’s one of more than a dozen structures in place today that can host up to 40 guests in rustic splendor. For the last 60 years, the sporting plantation has served as a corporate retreat for some of the leading timber companies in the nation. During the Mead Corporation’s heyday, Sid Hawkes would bring eight guests at a time and busy their days with hunting, fishing, and lobbying.

Although title to Cabin Bluff has changed hands over the last 60 years due to corporate mergers, the successor to Mead Corporation, WestRock, still owns and manages Cabin Bluff. To walk the grounds at the historic club is to understand why it has been cherished by so many for so long. 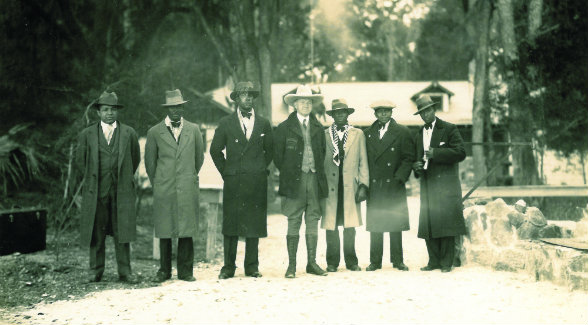 Silent Cal was a fierce supporter of racial equality. In his first State of the Union address, he declared that the rights of 12 million “colored people” were “just as sacred as those of any other citizen.” He also sought to make lynching a federal crime. Later, he signed the Indian Citizenship Act, which granted citizenship to all US-born Native Americans.

The Coolidge Tavern still serves five-course dinners that rival any big-city fare. Mementos from long-forgotten hunts decorate the walls of the rough-hewn lodge. The lodge’s main room, with its magnificent rock fireplace and leather furnishings, reeks of Old South. One look and you can hear the Bourbon being poured and smell the cigars being clipped. All told, the main compound and adjacent six-hole golf course designed by Davis Love III occupy less than 200 acres. The remaining 10,000 acres – the hunting grounds, the transitional lands, and the shores of the Intracoastal Waterway – are much the same as when the Coolidges visited.

“Cabin Bluff has been kept mostly intact, and that’s a very unique feature,” says LandVest’s Jonathan Burt. “It’s a peninsula that has remained pristine and mostly undeveloped. It’s the longest distance of undeveloped coastline waterfront on the Georgia coast, and that’s unique.” Overly developed resorts such as St. Simons Island, Jekyll Island, and Amelia Island can be found less than an hour away. 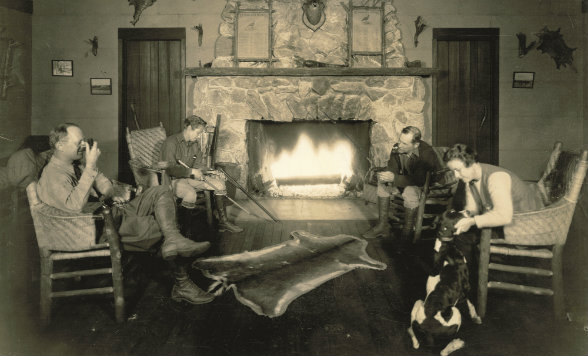 Then and now, everyone gathers at the end of the day to tell tall tales, give gear a once-over, and love on a favorite pup.

Yet the country’s oldest hunting club has also been permitted as one of the largest developable properties on the Georgia coast. The property currently features special zoning as Cabin Bluff Planned Development District, which allows for a wide range of residential and resort opportunities. This includes approximately 10,000 residential units and over one million square feet of commercial development.

“Just because it can be developed, that doesn’t mean that’s what’s going to happen to it,” Taggart says. He’s referring to the fact that for the first time since the 1950s, Cabin Bluff has come on the market. Will it remain a tribute to its storied heritage, or does the future hold a new vision for this ancient hunting ground? Consider for a moment that Camden County and the State of Georgia are currently pursuing the development of Spaceport Camden just down the road from Cabin Bluff. The goal is to create a world-class spaceport and aerospace industrial park just minutes away.

Although the decor may have been updated (right), the ambiance of the main lodge fosters a tradition of camaraderie that dates back centuries (left).

Jot down a short list of world-renowned getaways nearby – Sea Island, Saint Simons Island, Amelia Island, Jekyll Island, Cumberland Island – and the value of such a seaside tract quickly becomes apparent. “Much of the coastal land around here has either been poorly developed, overdeveloped, or placed under easement, with the exception of the Bluff tract,” Taggart says. “Cabin Bluff is like the Austin Healey that’s still sitting in an old farmer’s barn in mint condition. It’s just waiting for the right individual.”