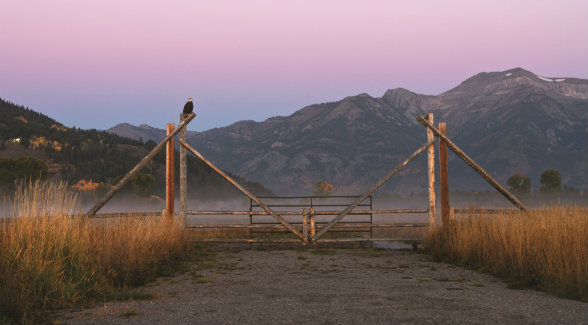 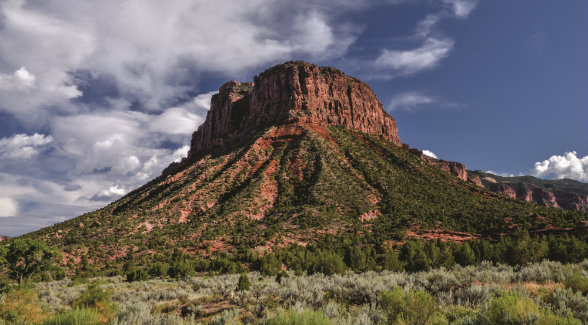 Encompassing more than 10 square miles, the most expensive listing in the American West straddles the rugged Colorado—Utah state line and includes portions of the geologic wonder known as Unaweep Canyon. Credit Discovery Channel founder John Hendricks with crafting this masterpiece. The ranch’s 22,000-square-foot main residence has eight bedrooms and eight bathrooms on four levels connected by elevator. Fountains, fireplaces, a chef’s kitchen, an art studio, a two-story library, a theater, a gym with pool and spa, a five-car garage, staff quarters, geothermal heating – the list of amenities is seemingly endless. An additional six bedrooms are available at the spacious guest house, stables, and a deluxe cabin. Improvements on the land range from an astronomical observatory to irrigated equestrian and bison pastures, fishing ponds, a trout stream, and a grass airstrip with its own hangar. Who’s to say what’s more impressive: the sunset views of Utah’s La Sal Mountains or the oversized dinosaur track planted on the ranch? [Listed by LIV Sotheby’s International Realty | www.livsothebysrealty.com] 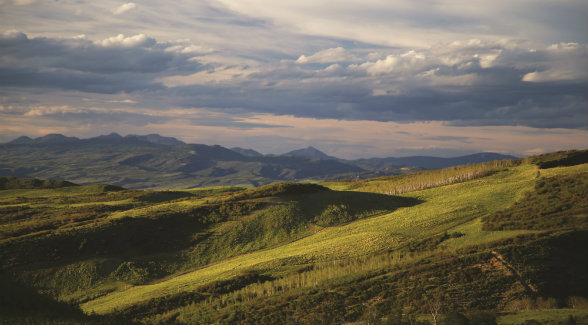 Totaling 224,050 acres, including 56,050 deeded acres and 168,000 leased acres, Cross Mountain is an agricultural powerhouse without peer on today’s market. Set in the heart of some of the most breathtaking terrain in the Centennial State, Cross Mountain’s Upper Ranch sits less than an hour from Steamboat Springs and a full slate of year-round activities. It’s even closer to the Yampa Valley Regional Airport. In addition, the Upper Ranch is home to North America’s largest elk herd. The ranch participates in Colorado’s Ranching for Wildlife Program, which provides significant benefits including additional tags and longer seasons. Farther west, the Lower Ranch possesses valuable senior water rights, and includes 12 miles of frontage on the Yampa River and 6 miles of frontage on the Little Snake. These riparian assets are in addition to more than two miles of the Williams Fork and numerous creeks and streams on the Upper Ranch. The combined carrying capacity of this diverse operation? Two thousand head of cattle and 10,000 sheep. [Listed by Mirr Ranch Group | www.mirrranchgroup.com] 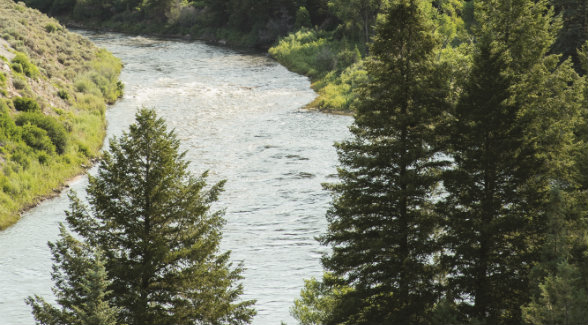 This legacy ranch is not just a mountain kingdom; it’s a plug-and-play opportunity. The well-established cow-calf operation runs 1,200 pair on 19,943 deeded acres plus an additional 50,000 acres of leased BLM and Forest Service lands. In addition to plentiful grazing, the Nottingham utilizes 1,200 acres of pivot-irrigated pasture and 2,000 acres of flood-irrigated pasture to produce 3,500 tons of hay annually. Headquartered near Burns, the ranch encompasses both sides of the Colorado River and abuts the renowned Flat Tops Wilderness Area, one of the largest wilderness areas in the Centennial State. In other words, the recreational component on the Nottingham is robust and a key revenue stream. The current outfitter has been on board at the ranch for more than two decades, enhancing stability and bolstering cash flow. Included in the sale are all livestock and equipment, seven residences, additional cabins, and immensely valuable senior water rights. One final note: the bright lights of Vail and Beaver Creek glitter just over an hour away via Highway 131 and Interstate 70. Eagle County Regional Airport (EGE) and its 9,000-foot runway? It’s a short 45-minute commute. [Listed by Slifer Smith & Frampton Real Estate | www.nottinghamranch.com] 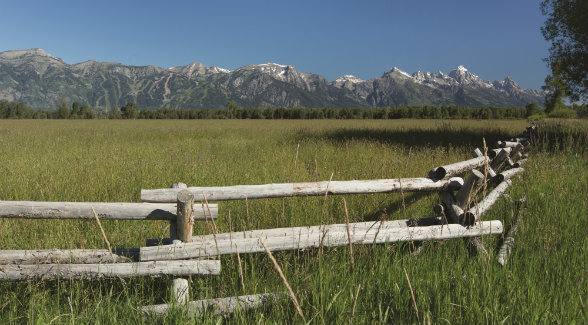 A one-of-a-kind opportunity in Jackson Hole, Spring Gulch affords the matchless resources of one of America’s most enchanting valleys as well as the tax advantages of the Cowboy State (see page 28). This contiguous 580-acre holding is the last significant portion of the famed Bar BC Ranch, a Teton Valley landmark that dates back to 1912. The ranch is comprised of six parcels ranging in size from 35 acres to 162 acres and is available in its entirety, in combinations, or as individual parcels. Prices on the tracts range from $8.9 million to $14.5 million. Each of the six parcels features stunning views of Grand Teton National Park; thanks to existing conservation easements, these vistas are assured in perpetuity. All parcels include private fishing access on the world-famous Snake River through the Bar BC Ranch. Home to Snake River fine-spotted cutthroat trout, the headwaters of the Snake received federal designation as a Wild and Scenic River and are overseen by the National Park Service. Off property, Jackson Hole offers an array of activities, ranging from cross-country skiing and downhill skiing at three different mountain resorts to championship golf at five different clubs. [Listed by Graham-Faupel-Mendenhall & Associates | Details: www.grahamfaupelmendenhall.com] 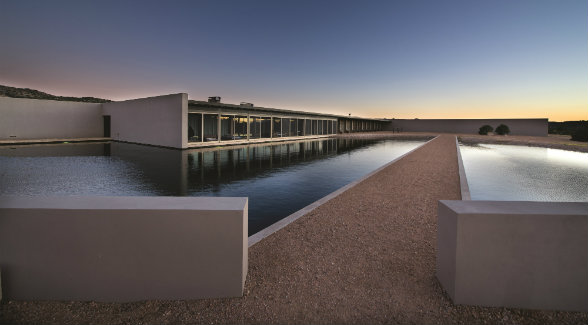 Consisting of 16,208 deeded acres and 4,454 leased acres in Santa Fe County’s Galisteo Basin, this landmark holding exudes history. Native American artifacts such as petroglyphs, pottery shards, and pueblo ruins are interspersed with mining relics from the gold, malachite, and turquoise plays in the nearby Cerrillos Hills. More recently, the current owner commissioned Tadao Ando to design and site two private compounds on Cerro Pelon. The first, including the main residence, was built by the design-build firm of Marmol Radziner. The firm also designed and constructed a separate ranch manager’s headquarters that blends with Ando’s designs. Complete architectural plans and scale models for Ando’s second residential compound are also in hand. It will be sited on the highest point of the ranch. In addition to staff housing, Cerro Pelon has a complete Western town that has been used for scores of movies, TV shows, and photo shoots. Among the productions filmed on the property are Silverado (1985), Lonesome Dove (1989), Wild Wild West (1999), All the Pretty Horses (2000), 3:10 to Yuma (2007), and Cowboys & Aliens (2011). [Listed by Kevin Bobolsky Group | Details: www.kevinbobolskygroup.com] 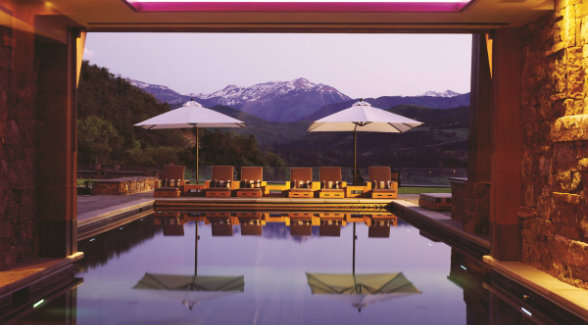 Jaw-dropping views of Snowmass Mountain, Capitol Peak, Mount Daly, and Mount Sopris serve as the inspiration for this 876-acre getaway’s name. Crisscrossed with 15 miles of private trails, Four Peaks offers a virtually limitless menu of activities on-site, including hiking, mountain biking, horseback riding, snowmobiling, and cross-country skiing. Need a little extra challenge? Then consider finding your way through the private labyrinth. Or hit the beach in your own cabana. Or go work on your short game on the chipping-and-putting green. The Craftsman-style residence, which totals 18,000 square feet, is a masterpiece in its own right. Every bedroom suite comes with a steam shower, and the master wing includes his and her baths. There are two private offices, a magnificent dining room, a large-screen theater with plush leather seating and its own stage, and a climate-controlled wine room. And then there’s the massage room, which offers a chromotherapy tub, a Vitamin D-infused sauna-and-steam room, a portable oxygen bar, an exercise room, and an indoor/outdoor saltwater pool with grottos and waterfall. Did I mention this was in Aspen? [Listed by Aspen Snowmass Sotheby’s International Realty | www.aspensnowmasssir.com] 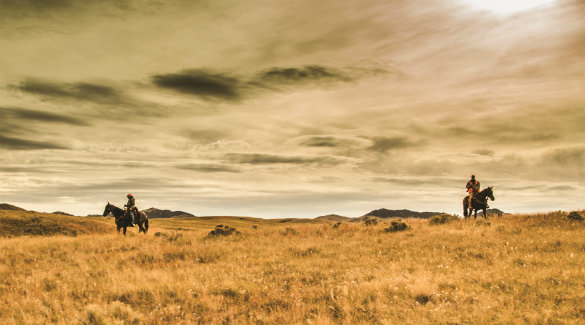 Consider this aspect to the IX: in its 128-year history, the ranch has only had two ownership groups. That’s the definition of a legacy cattle operation, and it’s just one of many elements that makes the IX such a standout. The ranch’s single-iron IX brand was first registered in 1877 when Montana was still a territory. Listing broker Dave Johnson has been selling ranches in Montana for more than three decades. He doesn’t consider the opportunity to acquire the IX a once-in-a-generation opportunity. In his opinion, given its track record, the IX is a once-in-three-generations opportunity. The 126,225-acre cattle ranch includes 59,809 deeded acres, 39,054 acres of state leased land, 9,527 acres of BLM lease, and 17,835 of private leased land. The real tally is the ranch’s P&L: Through 2016, the adjusted five-year average net income, calculated on the basis of EBITDA, was $1.8 million. The wildlife component of this Big Paw Mountains property is equally impressive (above). The most recent published reports list the big-game populations on the IX at approximately 425 elk, 295 mule deer, 300 whitetails, 355 antelope, and 39 mountain lions. [Listed by Hall and Hall | Details: www.hallhall.com] 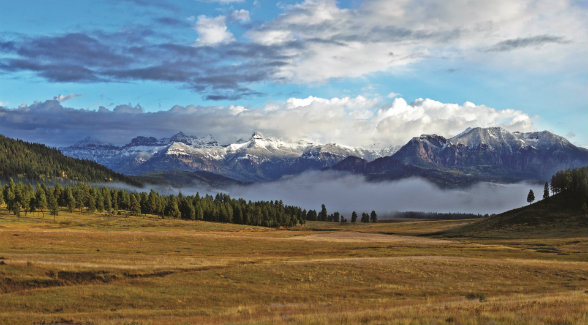 Talk about privacy! This 9,600-acre retreat sits in its own valley and shares nine miles of fenceline with the million-acre San Juan National Forest. Yet the front gate is just 10 miles from the vibrant resort community of Pagosa Springs. “Piedra Valley Ranch offers the rare opportunity to acquire a large contiguous block of beautiful and essentially untouched land in immediate proximity to one of Colorado’s favorite mountain communities,” says listing broker Cody Lujan. Improvements are functional, not gaudy, and require less oversight and upkeep than many properties. A six-bedroom, six-and-a-half bathroom mountain home situated at the south end of the ranch serves as the main residence. Additional structures include a caretaker’s apartment, a shop and garage, a lakeside cabin, a cowcamp house, and shipping pens. Piedra Valley Ranch is perimeter fenced and cross-fenced into three large pastures. Each has requisite water to sustain cattle and wildlife. Plumtaw and Cottonwood Creeks harbor small trout and run through the property for roughly one-third of a mile before converging and forming the head of O’Neal Creek, which meanders for four-and-a-half miles through the ranch. [Listed by Hall and Hall | Details: www.hallhall.com] 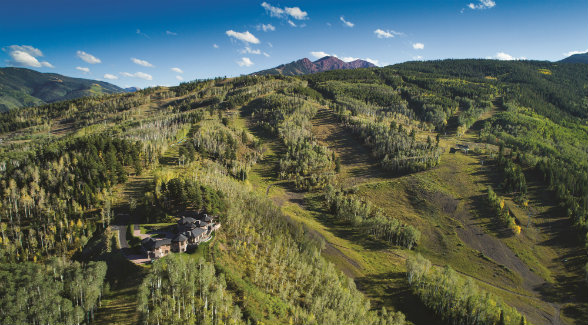 A unique offering even by Aspen’s lofty standards, Owl Mountain Ranch is the only ski-in, ski-out property that includes West Buttermilk Ski Area access. Set on 61 acres, the property features more than 30,000 square feet of functional spaces, including a 15,664-square-foot main residence that includes seven bedrooms, seven full bathrooms, three half baths, a great room, a chef’s kitchen with two ovens, a study, a theater, a pub room, a wine room, a billiards room, and a dining room that can accommodate up to 50 guests. In addition, Owl Mountain has 4,600 square feet of year-round terraces for taking in the to-die-for views no matter the temperature. Additional structures include a 2,000-square-foot caretaker’s home with three bedrooms and three full baths as well as a 7,500-square-foot barn for equipment storage that includes a 3,000-square-foot heated vehicle maintenance center and lift. As you may have already surmised, the property has its own private ski run. That’s one of the benefits of owning land in the middle of the great outdoors with an adjacent ski area and the Maroon Bells-Snowmass Wilderness Area close by for hiking, biking, and exploring. [Listed by Aspen Snowmass Sotheby’s International Realty | www.aspensnowmasssir.com] 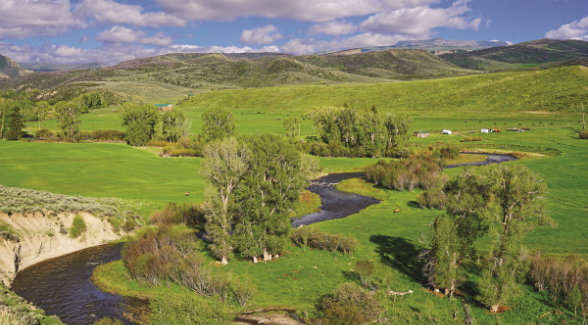 Most larger holdings in the Rockies are not contiguous. More often than not, they consist of separate tracts cobbled together by different owners with public and private inholdings checkerboarding the landscape. And in many cases, neighbors and even the public have the right to cross a ranch in order to access adjacent lands. Not so at the Motherwell. A single privately deeded block, these 16 square miles rise from the Williams Fork River some 2,500 feet to the lava cliffs that mark the ranch’s southern boundary with the Routt National Forest. In addition to superb fishing on 3.3 miles of Williams Fork frontage down low, the Motherwell has three high-mountain lakes ranging in size from 10 acres to 16.5 acres and more than 90 natural and man-made ponds. These aquatic resources are complemented by the Motherwell’s location in Northern Colorado’s coveted Game Management Unit 12. “The overall hunting experience offered at the Motherwell is so exceptional that we stay fully booked year after year, without the need to do any advertising,” says Brian Gardner, the ranch’s executive director. The Motherwell can be managed for a variety of grazing options, including a ranch herd of 200 to 250 head as well as a yearling program. [Listed by Hall and Hall | Details: www.hallhall.com]