BY JULIE BLACKLIDGE PUBLISHED JULY 2007 You’ve seen his work. Chances are you’ve tasted it as well. The winner of five Academy Awards, Francis Ford Coppola has also won rave reviews for his wines. His first release, a 1977… 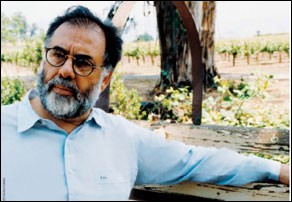 You’ve seen his work. Chances are you’ve tasted it as well. The winner of five Academy Awards, Francis Ford Coppola has also won rave reviews for his wines. His first release, a 1977 Rubicon Napa Valley, received a stunning 93 score from Wine Spectator. Yet like so many aspects of his career, Coppolas roots as a winemaker were not tied to winning kudos but to his passion–in this case, an amazing piece of property.

In 1974, Coppola and his wife, Eleanor, were living in San Francisco with their two boys, Gian-Carlo and Roman, and daughter Sofia. His latest film, The Godfather: Part II, was both a critical and a commercial success, and the family was enjoying life in the city by the bay.

“It just seemed so interesting to me that when I lived in San Francisco, I thought, gee, we are quite close to the Napa Valley” Coppola says. “We ought to have a summer house. And we had boys. They couldn’t go swimming or whatever, and then in the back of my mind I thought … we could also have some acres of grapes and recapture that wacky tradition of making wine with the kids jumping in the grapes. And that’s what we did.”

Getting his kids knee-deep in Cabernet Sauvignon may have been his motivation, but finding the right piece of land in the Napa Valley proved to be a considerable undertaking. The couple drove back and forth from San Francisco to Napa, scouting different properties for more than a year with no luck. Finally their real estate agent told them that the Niebaum Estate was going to be auctioned.

“And we said, ‘What’s the Niebaum Estate?’” Coppola says.

Only the most storied vineyard in the history of the Napa Valley. Gustave Niebaum was a Finnish fur trader and sea captain who hit it big in the late 19th century. Like Coppola, he settled in San Francisco, and he too sought a Napa County getaway. In 1880, Niebaum founded the Inglenook Estate in Rutherford, which is now located at the heart of the distinguished winegrowing region.

Within a decade, Inglenook wines were internationally renowned. Although Niebaum died in 1908, his fabled winery stayed in the family until 1964 when it was sold to Allied Grape Growers and, eventually, Heublein Corp.

“It was this beautiful house and we thought, oh, this is where the rich people live,” Coppola says. And it was so beautiful that we made a bid.”

They didn’t win, and although they were disappointed, the Coppolas continued their search, visiting bigger homes and bigger estates. The result was a realization that an exceptional opportunity had been lost. “Everybody said, ‘Inglenook was the Queen of the Napa Valley And so we were sort of a little discouraged,” Coppola says.

“And then a year later, because of the change in the agricultural laws, the people who had bought the estate were not permitted to develop the mountain into homes, which is why they bought it,” he says. And so we heard the rumor that it was going to become available, and we just grabbed it.”

Coppola purchased 1,560 acres of the Inglenook Estate in 1975. “[The land] is just very, very beautiful. It’s a whole small country. It’s very big, and each part of it has another joy. It has forests and mountains, lake and vineyards, and many, many attractions. So over the years, I mean, it was just a fabulous home and fabulous climate, weather, and we sold the house in San Francisco and just moved there permanently. And, in fact, I raised my kids there. My kids went to the local schools in St. Helena, and it’s just a sort of a paradise.” As a child, Coppola listened to his father and grandfather tell stories about making wine during Prohibition in the basement of their New York City home by stomping the grapes with bare feet. The image of that lingered in Coppola’s imagination for years.

“The thing that was in the back of my mind were these stories I had heard from my father and uncles about how they actually made wine in New York and just the story of the kids trying to steal the grapes,” he says. “And I said one day, ‘Maybe we should make wine.’ And I had no money at all because I was going through all the reverses of some movie I had financed and lost with, and I remember I borrowed like $40,000 from my mother to just begin a small winemaking operation. That’s when we made the first Rubicon,” he says. 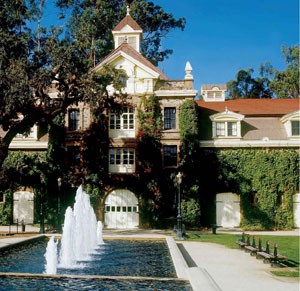 In 1977, his vision was realized as he watched his father, his kids, and his wife stomp grapes barefoot in the basement of their new Napa Valley home. That lot produced four barrels of a critically acclaimed wine that was never commercially released. A winemaking tradition was born, one that continues to this day.

In the decades since, Coppola has found himself faced with many decisions. Quite often he feels it best to trust his heart as well as his head.

“One day I came home to the estate and I noticed the whole vineyard was planted with aluminum grape stakes, you know, these poles. And I looked at these aluminum poles and normally it’s wood. I called the guys and asked, ‘What is this?’ All of a sudden I’ve got to look out at a farm of aluminum grape stakes. And they said, ‘This is the newest thing because the wood … gets old, you have to replace it, and the aluminum is good forever. What’s more we’re going to plant the new XR stock, which everyone is going to, which is a root stock that is guaranteed … to be resistant to any form of pestilence or pest or phylloxera.’ I said, ‘I really do not want to look at aluminum grape stakes.’ So I asked them to take them all out. And I don’t want the new XR stock either. I want the original kind that Captain Niebaum had in the estate.’ They all thought I’m a wacko, but they pulled it out. Pulled out all the grape stakes and pulled out all the XR and planted it with the original ones,” he says.

As many disappointed Napa vintners eventually learned, the new and improved XR root stock was not bulletproof. It was, in fact, vulnerable to the dreaded phylloxera, a tiny insect that has decimated vineyards worldwide. Coppola says, “All over Napa Valley, vineyard after vineyard, large, large amounts of acreage all got phylloxera. So that’s how sometimes being a little bit of a fanatic can save you multimillions of dollars.”

Being a good steward of the land is a top priority for Coppola, who is a sentimentalist at heart. His initial purchase, in 1975, was of only a portion of the Inglenook Estate. The Queen of the Napa Valley had been parceled off in several sales by the Niebaum heirs as well as subsequently by Heublein. In 1995, two decades after his initial acquisition, Coppola acquired the remaining portions of the Niebaum Estate, including the stately chateau, which took two years to renovate and return to its original glory.

From the very start, however, Coppola has treated his land with utmost respect: nurturing it and bringing out its best qualities. He has plans to revive an old olive grove on the estate and grows all his wines organically. In 2006, he purchased the former Chateau Souverain Estate in neighboring Sonoma County. He renamed it after his more affordable wines, Rosso & Bianco, and gave the Rubicon name to the Inglenook Estate, where his higher-end wines are produced. The Diamond Series Collection, Sofia, and his new Director’s Cut line are all crafted at Rosso & Bianco.

“It’s so rare in American history. I mean, there are great old things that are broken apart and sold off to companies and split into pieces like the movie studios, for example. And that’s what had happened to Inglenook. The winery was shut down, and the winemaking, since it was part of the big company, was moved over to another winery in Oakville. We pieced it all back together and restored it all. And it stands today as it had been.